An overnight attempt to crash Bitcoin alongside the US stock market met with extreme resistance as the cryptocurrency bounced back handsomely.

The BTC/USD exchange rate lost $465, or 3.51 percent, after the New York opening bell Monday. The pair fell to as low as $12,785, only to find a considerably higher buying sentiment. As a result, BTC/USD rebounded almost instantly after touching the said local bottom, climbing back above $13,000 to reclaim the level as support.

Interestingly, the brief downside attempt in the Bitcoin market appeared almost in sync with a similar sell-off across the US stock market. The Dow Jones Industrial Average plunged 650 points, or 2.3 percent, logging its worst one-day decline since September 3, led by a drop in leisure and travel stocks. 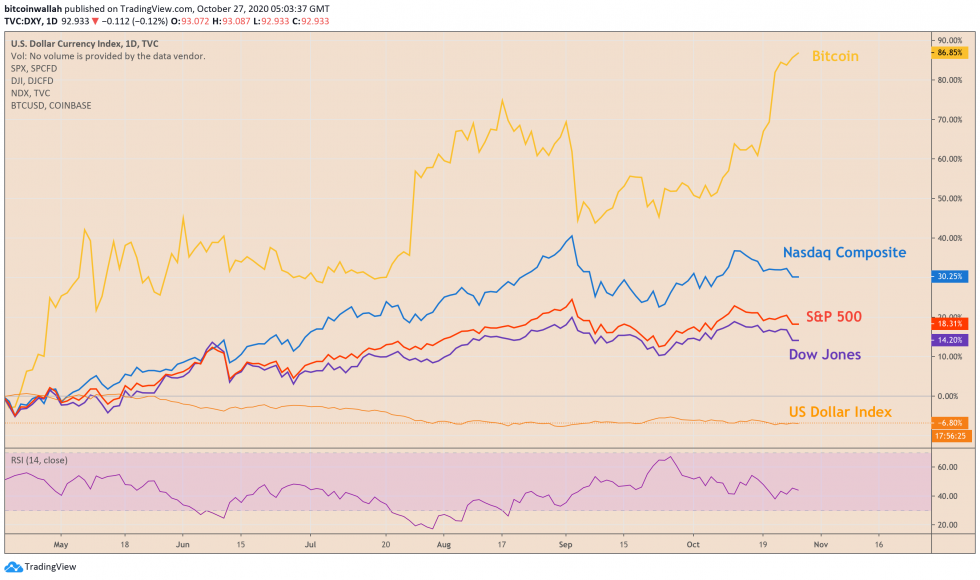 Bitcoin correlation with the Wall Street indexes and the US Dollar Index. Source: DXY on TradingView.com

Meanwhile, the benchmark S&P 500 and the tech-savvy Nasdaq Composite dropped 1.9 percent and 1.6 percent, respectively. Together, all three indexes were down more than 5 percent from their record peaks earlier this year.

The US stock market suffered pain as investors assessed the growing number of coronavirus cases in the country. The infections reached an all-time high of 68,767 on Monday. Additionally, scientists warned that a second way is due amid the coming winter season.

That is increasing worries about tighter lockdown restrictions and their impact on an already-suffering US economy.

Bitcoin and the US stock market could survive the first round of lockdowns because of the US government’s $3 trillion fiscal injections into the economy. Nevertheless, the situation is direr in current times. The first stimulus package stands dried, and the second one remains stuck amid a political battle between the Democrats and the Republicans in the US Congress.

Analysts believe no package will come up until the November 3 presidential election. That explains why investors are seeking safety outside equities.

“BTC is now above where it was 24 hours ago, even though the Dow Jones dropped 640 points today. That is impressive, especially to those who (mistakenly) thought the two asset classes were correlated. Year-to-date, the US stock market is negative. BTC is +80%.”

The overnight sell-off and subsequent recovery in the Bitcoin market attest to the renewed demand. The cryptocurrency traded more in line with gold, a traditional rival asset, than with the risky stocks, showing that investors are beginning to explore its safe-haven characteristics. 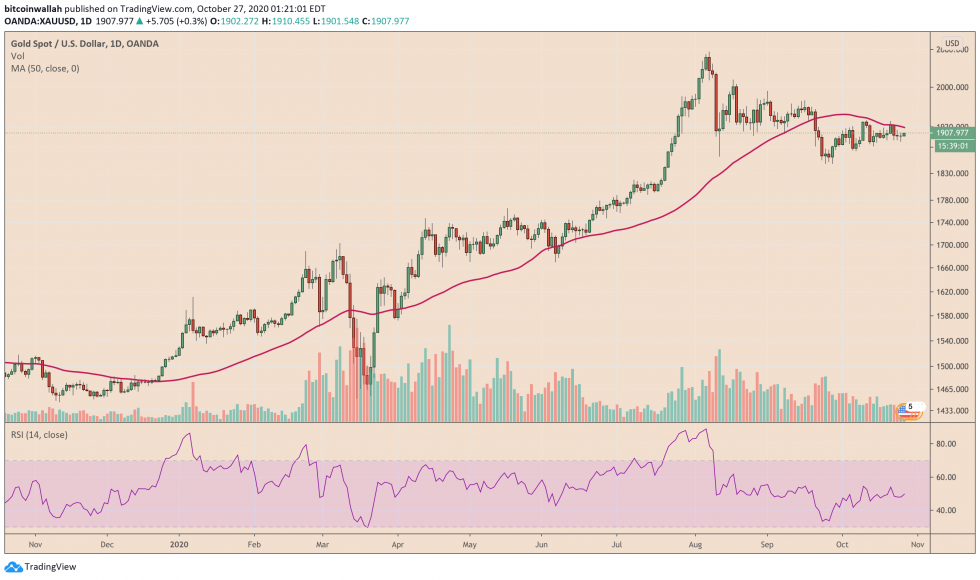 Spot gold recovers on the line of Bitcoin after witnessing an early morning decline Monday. Source: XAUUSD on TradingView.com

The sentiment follows a JP Morgan report in which analysts treat Bitcoin as an alternative to gold among millennials. The study expects the cryptocurrency price to increase by 300 percent in the coming years.

That party explains Bitcoin’s ability to hold $10,300 as its interim support amid unsupportive fundamentals.

If Yearn.finance (YFI) Surmounts $16,000, It Could Start a New Uptrend