It seems like nearly everyone is talking about Moderna (NASDAQ:MRNA) these days. The biotech even came up in the last presidential debate. The focus of attention, of course, is Moderna’s mRNA-1273, which is one of the clear leaders in the coronavirus vaccine race.

But talk is cheap. Investors have to put up hard-earned money when they buy a stock. Is Moderna worth it right now? Here are three reasons to buy Moderna — and one reason to sell. 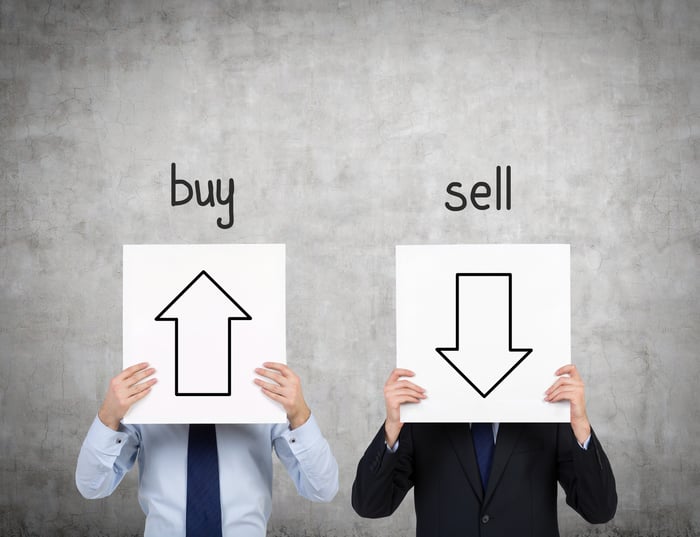 There’s one obvious reason to buy the biotech stock: Moderna has a huge upcoming catalyst on the way. The company has already reached full enrollment in its late-stage study of mRNA-1273. It expects to file for U.S. Emergency Use Authorization by late November. Moderna has already begun rolling regulatory submissions for its experimental COVID-19 vaccine in Canada and received a green light to do so in Europe as well.

At this point, investors have a good reason to be cautiously optimistic about the prospects for mRNA-1273 to make it to market in the U.S. and in several other countries. How important is this for Moderna? CEO Stephane Bancel summed it up well with his comments in the company’s Q3 results press release: “I believe that if we launch our COVID-19 vaccine, 2021 could be the most important inflection year in Moderna’s history.”

2. Big bucks potentially on the way

Don’t overlook the major financial impact for Moderna if mRNA-1273 wins EUA in the U.S. and regulatory approvals in other countries. The company has already recorded a whopping $1.1 billion in deferred revenue solely from deposits related to supply agreements for its COVID-19 vaccine. Even more big bucks could be on the way.

The prospect of a huge cash influx is important to consider when evaluating Moderna as an investment. The company could almost instantly become profitable with late-stage success for mRNA-1273. Profitability, especially with the potential for earnings to increase in the future, can (and should) change mindsets about a stock.

The third reason to buy Moderna is its promising pipeline. In addition to mRNA-1273, the biotech has five other clinical-stage vaccine candidates based on its messenger RNA (mRNA) technology. Moderna expects to advance one of those, cytomegalovirus vaccine candidate mRNA-1647, to a late-stage clinical study next year. It also has seven other mRNA-based products in clinical studies.

Moderna has long believed that if mRNA works for one disease, it should work for many others. It seems likely that investors will value the company’s pipeline much more highly if mRNA-1273 is successful. Success for the COVID-19 vaccine will also provide Moderna with the financial resources it needs to advance its most promising pipeline candidates.

There’s one reason to sell Moderna that stands out above all others: risk. The company’s fortunes hinge on mRNA-1273’s efficacy and safety. If the experimental vaccine fails on either count, the three reasons to buy Moderna mentioned above largely evaporate.

Of course, even if mRNA-1273 flops, Moderna’s other pipeline candidates won’t necessarily follow suit. Still, the company is banking on its mRNA technology working. If it doesn’t achieve commercial success on the first shot (no pun intended), there will be a lot of skepticism about all of Moderna’s mRNA vaccines and therapies in development.

Does the risk level for Moderna outweigh the reasons to buy the stock? I don’t think so.

My view is that mRNA-1273 will win regulatory approvals and authorizations. That will pave the way for Moderna to make a lot of money in a short period of time. The biotech will then use that money to further its pipeline. Over time, Moderna’s other pipeline candidates could then also prove to be successful. All of this would also make any current concerns about the stock’s valuation moot.

We should know soon if my optimistic outlook for Moderna is warranted.

Something ‘Bogus’ Is Happening With COVID Tests